Rajesh Tiwari is posted as Civil Engineer in the North-Eastern Railway and maintains his distinctive identity as a highly educated, knowledgeable, serious thinker. Well-known for his ease, spirituality, creative power and honesty, Mr. Tiwari is also famous as a popular astrologer,numerologist and vastuvid national and internationally. 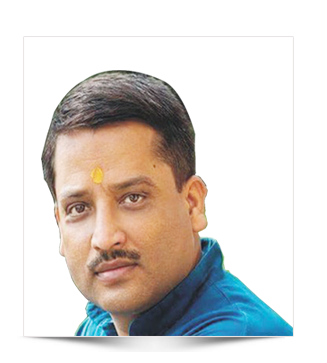 In addition to his popular columns and articles related to astrology, medical astrology and astological architecture in many reputed newspapers and magazines in the country, he is invited to discuss astrological discussions on many popular channels. Famous for his scientific exposure and clarity on calculation. Mr. Tiwari has been a pioneer of astrological health research and it gives him the most prestigious and highest place in his field.

He was recognized on the national horizon when he predicted the Lok Sabha elections in April 2004 in astrology journal Future Analysis, he wrote that Shri Atal Bihari Vajpayee would be neither the Prime Minister nor the BJP would come into power but the Congress government would be formed and under Mrs. Sonia Gandhi’s leadership her party would perform excellently even though she herself would not be able to be the Prime Minister. At this time, he was the only astrologer in the world who made this prediction with evidence, after which a long list of successful predictions of the subjects like government, stock market,weather and sports jumps became. By predicting hundred percent correct result of the 2009 and 2014 Lok Sabha elections, the Bihar assembly of 2015, he gave a new dimension to astrology. While predicting the results of Uttar Pradesh assembly elections-2017, he said that the Samajwadi Party would not even save its prestige and the Bahujan Samajwadi Party Stay far away from power and the Bharatiya Janata Party will not only make the government but Mahant Adityanath will be the Chief Minister. This future Prophecy also proved to be one hundred percent true as the former. At present, Mr. Tiwari is working on research in Jyotish Bhawan and after getting the birth details of the natives, he is working on various diseases, such as heart attack, depression, cancer, diabetes etc. The research of depression has been completed and thousands of patients of depression have benefited from this research. He uses the “planetary-breath System “ (which has been developed by him) to cure depression patients, which is completely free.

His research on heart attack has been completed and tests are still going on . In addition to his medical research, he keeps the people aware of the fast spreading Hypocrisy in the society. At present, the books “Mangal Dosh ka Vigyan” and “Rahu Kaal Kal – Tandava” coming in the form of the reward of his researches on the Mangal Dosh and Rahu Kal.

Unless people know the basic purpose of Indian astrology is not a future statement, but it is merely a partial use, Until then, the development of this science is not possible. In fact, the aim of Indian astrology created by God is to give full and complete fulfillment of the physical, mental and spiritual level of the human being. In order to provide this super natural scripture for the sake of public welfare, the great sages have made it practical in the process. Yoga, Ayurveda, mantra, mantra utility, natural system, philosophy of life etc. are all its parts. Even the oldest book of world library whih is known as Vedas, clarified that “Jyotisham Ayanam Chakshuh”. It means the vedas can only be seen by the astrological eyes.

But due to slavery and in the absence of basic education, we laugh at this science and ridicule the adopter as ridiculous. Only by ignorance of this science, the world is surrounded by violence, terrorism, despair, depression, characterlessness, dutifulness, dishonesty, humiliation etc. Due to illiteracy, people come into cobweb of hypocrisy. The burning examples are those astrologers who do not know the a,b,c,d of Astrology they are robbing the people by propagating themselves as a Asteroid. In addition to the above, such type of so-called astrologers are misleading the public in the name of the worship,Yantra,Kawach, armor, pitrodhash, mangal dosh, kalsarp Yog, Pitra Dosh etc. Today, the results of illiteracy is that the simple yogasan practitioner, who is known as a trainer or teacher is bestowed by the title of Yog Guru, , whereas the truth is that he does not know the meaning of Yoga. The man who is doing business of the millions can not be even yogi because for being yogi one should be free from Kaam (Desire),Krodh(Anger),Mad( Proudness),Lobh (Greedness) in all respect.

It is very difficult to quote all the research done by Mr. Tiwariji for the welfare of the masses but some important research works are as follows

DEPRESSION, INSOMNIA
Insomnia, Depression, Nervousness, Restlessness etc. are completely curable by “Grahiya-Shawasan Sidhant” (Planetary breath System ). The research of depression has been completed and thousands of patients of depression have benefited from this research. He uses the “planetary-breath System “ (which has been founded by him) to cure depression patients, which is completely free.

HEART DISEASE
Everyone can know ,whether he is prone to heart disease or not by his horoscope. The special researches enable to find out the certain period of heart disease with complete remedial measure to prevent. This was evolved by Shri Tiwari ji after rigours research more than 20 years.

Panchamantra: – Through this research, Tiwari has clarified that what cares should be kept in mind before consulting astrologer. If all the people follow the stated rules, they can not only easily escape from being cheated, but can choose the knowledgeable and righteous astrologer himself.

Kalsarp Yog: His book “Pakkhand –Kalsarp ka” provides detailed description of the research in detail.
Rahukal: It is like a slap on the faces of so called astrologers and priests, who are doing business in the name of Rahu and Ketu. His research on which it has been written in the “Rahu kaal Ka Tandava:” has been clarified that in fact, by revealing the fear of Rahukal, so -called astrologers and priests make their selfish pursuit by terrorizing the public.

Mangal Dosha: Tiwariji made a surprising fact in this research, he explained that about 42 people in every 100 births are founded Mangli or Mangala, but only 5 to 6. Percent native suffered from Mangla or Mangali dosh . In the absence of this knowledge, astrologers can not balance the Mars during matching of the horoscope of Boy and Girl for the purpose of marriage. As a result, unbalanced Mars makes life equal to hell. He has written a book based on his research to give the right direction to the people, which is going to be published in the name of “Science of Mangal Dosh”.

Feng Shui: By his research, Tiwari told that Feng Shui is just entertainment in the Indian environment, the reality is that it is merely blind to compare it with Vaastu. To save the people from this hypocrisy, he also wrote a book called “Feng Shui’s Jaharavad”.

A prolific writer,Tiwariji has written several books and writes for many magzines and news papers. Being a civil engineer he writes the astrological facts in very scientific and easy languages. The following books are the newly written and are available in market as well as at amazon,flipcart and jyotish bhawan too.

The founder of this concepts and researches is Pandit Rajesh Tiwariji This astropathology centre provides complete examination of health according to your horoscope. The prevention of running diseases and cure are suggested. The disease which are prone to arise in different negative periods are clearly indicated and the remedial mesures are also suggested. You may save yourself from active diseases completely and minimize the impact of inherent diseases. The Jyotish Bhawan provide the facilities of examination of health to everyone.

If you are going through a bad phase of “economic impoverishment”, the following measure will definitely help you and will bail you out from the entire precarious situations:-

Chant at least 6 mala(garland) of panchmesh(lord of 5th out). Make kheer (a type of desert which can be made by mixing rice, milk, sugar and dry fruits) of cow milk every monday and after it to a brahmin or teenage girl first. Repeat it on every friday and offer first to cow itself and then to elderly person. To bring economic affluence in your life and home.

If you want to fix success of a particular assignment for the money then chanting of “Asta sidh nav nidhi ke data, karhun kripa he mangaldata” eleven times before going for the assignment will definitely help you to achieve the goal.

However, despite earning handsome money, If you are still going through few economic problems,then chanting of “kanak dhara stotram” will help you immensely.

If you are losing money again and again then put “cow dung” at the northeast (Ishan) part of the home and also write “Shreeng” by using cow dung in the vault or wardrobe and see the miracle.

We have to understand that marriage is not social union or legal contract but it is sacred union of two soul. Both husband and wife ends their individual existence to form a condominium unit. The creater has gifted some speciality and inperfection to both male and female ,after the marriage both are supposed to compenstate their imperfections by specialities of each other and their selfless devotion makes whole personality . For happy marriage life, proper attention should be paid during matching of horoscope by considering following points:-

It should be ensured that country, age, family environment, culture and rituals of boy and girl should be nearly same. .

The Matching by computer is totally inadequate only preliminary marriage matching should be done by Ashtkoot Guna (on the basis of matching constellation) that traditional method of matching. .

It is seen in daily life that inspite of good match,there are to many problems like lack of mental,physical,familiar harmony, separation,divorce etc are increasing day by day. Happy marriage life is going dream for the new generation. To ensure the happy marriage life, matching should must be done by “Chandramukhi” method only. In this method very vast angle are kept to match like-physical, mental, economical, longevity, children prospects and future prospect etc.

In addition to indian astrology, the indian numerology based on tithi, month, year, date of birth, letter of name etc. are also deeply considered during matching of horoscope. That is why this method gives nearly hundred percent successful marriage life.

Tiwariji is known as father of scientific vastushastra .First time in history of world he defined vastu in scientific language “ Vastu science is basically a part of Indian astrology, in which it is kept in mind that the energy emitted by the planets should be balanced in every part of the building or in every direction by using the energy graph which shows the amount of energy required for various purpose”. That is, the balanced flow of seventh planetary energy in the building is the foundation stone of Vastu. In fact, this science has a profound effect on human life. The manner in which the birth of a person, during the birth of a planetary force, makes it clear that he will enjoy great health, austerity, happiness and longevity in his life, in the same way, during the construction of the building, the communication of planetary energy required for the vibrancy of each direction provides pleasure.

Talking about the death of a person, destitution of inferiority, childlessness, etc. due to architectural faults is nothing but stupidity, because there is a separate subject of predictable error and architectural defects. The Vastu Rule is the only change that is unimaginable.

Rajesh Tiwari is retired as Civil Engineer from the North- Eastern Railway and maintains his distinctive identity as a highly educated, knowledgeable, serious thinker. Well-known for his ease, spirituality, creative power and honesty, Mr. Tiwari is also famous as a popular astrologer,numerologist and vastuvid national and internationally.